Traditional wedding vows include a sacred oath. They recognize that every marriage, as designed by the original Matchmaker, is intended to reflect a much bigger reality than joint checking accounts and shared household chores. Consider the following words that have opened millions of weddings over the past few centuries: “Dearly beloved, we are gathered together here in the sight of God, and in the face of this congregation, to join together this Man and this Woman in holy Matrimony; which is an honorable estate, instituted of God in the time of man’s innocency, signifying unto us the mystical union that is between Christ and his Church.”

A mystical union? Christ and His Church? Heavy stuff. But a good reminder that giving ourselves to one another in marriage is a picture of what our Lord did when He gave himself to us.

Relatively few in this generation realize that marriage is about more than two people finding happiness in this life. It is designed to serve as a picture of that eternal “happily ever after” between God and His beloved bride, the church.

Therefore,we can define the target of spiritual formation in marriage as follows:

Marital Success: Every marriage is intended to be a picture of the marriage between God and His people as we selflessly give ourselves to another through mutual submission and loving intimacy (Ephesians 5:31–33).

When we exchange rings we promise to become part of a story much bigger than the subplots of our individual lives. When we snap wedding photos we record a union that is intended to become a picture of the union between God and His beloved people.

We promise to remain faithful and devoted to one another “till death do us part” not just because lifelong marriage is the best path to lasting health and happiness. We do so because, in God’s eyes, the two of us cease to exist as autonomous individuals with separate identities and agendas. We become one.

Sadly, those who abandon their vows damage more than their own hearts. They also destroy the beautiful masterpiece that every marriage is intended to reveal to the next generation.

We unpack more about spiritual formation in marriage in Chapter 2 of ‘It Starts At Home’. 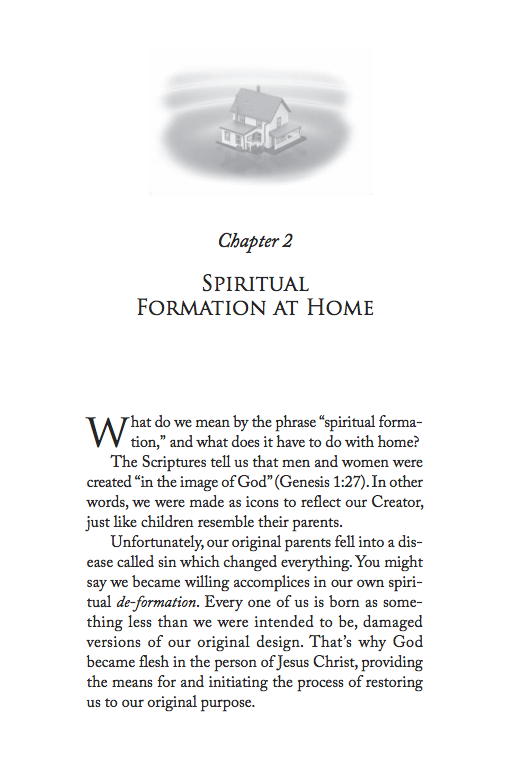 Download the PDF of Chapter 2 from ‘It Starts At Home’